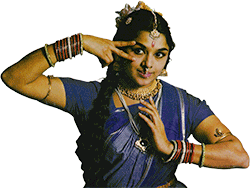 Padmini was an internally acclaimed dance and actress of stage and film.

Padmini was trained as a Bharatanatyam dancer by Vazhuvoor B. Ramaiah Pillai and Mahalingapillai and was trained by Guru Gopinath in Kathakali, a story-telling dance form of Kerala. In 1948 at the age of fourteen she began acting in Indian films and over the course of nearly 30 years acted in over 250 Tamil, Telugu, Malayalam and Hindi language films.  She was awarded both Filmfare Awards and the Tamil Nadu State Film Award (Thillana Mohanambal).  She also acted in the 1957 Indian-Soviet film, A Journey Beyond the Three Seas, now considered a Russian literary monument and brought Bharatanatyam to a whole new audience.

After marrying in 1961 she settled in the United States and in 1971 opened the "Padmini Institute of Fine Arts" in New York where she taught classical Bharatanatyam Indian dance. It was the first major Indian classical dance school in America.  She taught hundreds of students (she would affectionately say " I forget how many children I have") and classes were held in Queens NY, NJ and later Philadelphia.  Padmini founded her dance institute to make Bharatanatyam accessible to the American public and train anyone interested in this art form, thus continuing her efforts to expand Bharatanatyam to a world audience.  Padmini was proud of teaching Bharatanatyam to Americans and second generations Indians and along the way introducing her students to other aspects of Indian culture. She would say "You watch them dance and can't believe they were raised in America".

Padmini also choreographed and directed several Bharatanatyam dance dramas on various themes: Hindu gods such as "Ramayana", "Dasavathar", "Krishnaleela", "Valli's Wedding" and classic Tamil Literature like "Kannaki". Her most creative production, "Siddhartha", presented the life and teachings of Buddha with English dialog set to Indian classical music. It was acclaimed as the best new dance drama by leading Indian newspapers.