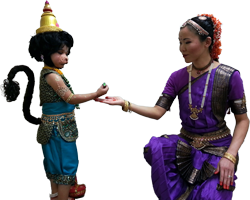 Many people have commented on the costumes and props that I have created for my students and asked me to describe my design process. I have written this section to give some insight into my design choices.

Costumes are an integral part of a performing art such as Bharatnatyam and are invaluable for instantly conveying to the audience the mood and important details of the characters that will be presented in each dance.

Everyday I am inspired by the beauty and joy in the various Asian art forms.  I try to give my costumes lots of the rich details seen in paintings and carvings but balancing that with keeping costumes light and uncumbersome for the performer. 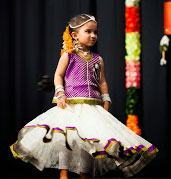 I started putting together the Mani Megalaiye costume with 2 main features I wanted to highlight. First, I wanted a skirt that would be super twirling when in the dance to highlight the choreography.  And second, based on the line in the song “ even without gold jewelry your beauty shines so bright” I didn’t want to use gold for the ornaments and so I was originally thinking to try for colorful jewelry. When we went shopping for the costume, I couldn’t find any color skirt that I felt twirled enough.  Then I saw the white skirt sets with a lace layer and a tulle layer and I was blown away by how beautifully it twirled and the simplicity of the color scheme!

I wanted to make an all pearl hair ornament to complement the white skirt sets that reminded me of the section in the Tamil epic “Silappadikaram”, (the companion novel to “Manimekalai”) where Kovalan is walking in the harbor and meeting the other pearl merchants returning from the pearl fisheries. Kovalan loved listening to stories of peril and adventures at sea and how Manimekalai, the Goddess of the Sea, saved their ancestors. 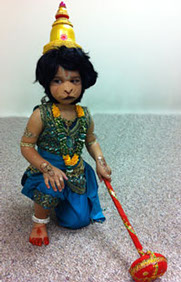 I wanted the costume to look like Hanuman, the Monkey king, from Thai dance.  So the top part should look like to fierce warrior armor with short pants that end at the knee.

To create the tail I used 12-2 electrical cable that was wrapped with thin layer of batting and then covered with fur wrap and then hair extension pieces were added at the end for a curly effect.  The wire allowed the tail to look very real and hold its shape when performing without any support wires that would give it away. 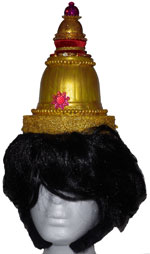 As the monkey king, Hanuman has a beautiful crown of red and gold.  I wanted the crown to be attached the hair so that it would be one piece and therefore more stable during the performance. I used a clear plastic strip that went from the base of the crown inside the wig, under the chin and up through the other side of the wig and attached to the base of the crown on the other side.  I attached the sideburns to the plastic strip to hide it and as way to secure the sideburns without having to glue them to her face. The monkey nose is actually a plastic mask for a lion face that I trimmed down.

It was great to have a small dancer play Hanuman, as he can shape shift from a very small (cat size) to so tall that he can carry mountains! When he finds mother Sita in the Ashok garden, Hanuman sees that she is upset and scared so he shrinks to a small size so as not to startle her and approaches her as a child and calls her Mother Sita.